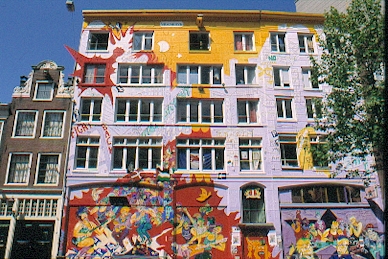 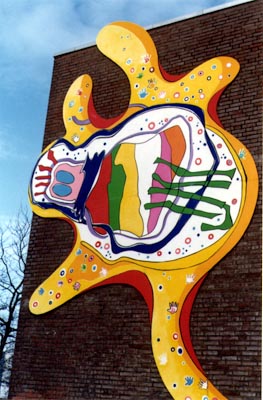 The foundations for my passion for murals were laid at the the Royal Academy of Visual Arts in Den Haag in 1981. At that time it was forbidden to hang anything colourful on the walls of the building.
Of course this was an invitation to a spontaneous late night mural painting action. This action ended for Kris Spinhoven, Bart Boon, Roeland Zijlstra and myself in the cell. After being suspended from school for three weeks, we were told that we were welcome to return, and to bring a design for a new mural.

What is special about murals is that they become common property for a specific place. A painting is hung in the home of an art lover. A mural is visible for everyone. I always make a sketch design for a mural on an A4 piece of paper. From that A4 piece of paper I set out the lines of the image in one go on the wall of a building, like on the 'Vrankrijk' in Amsterdam with its 10 by 20 metre wall. It demands an enormous amount of concentration to set out an image on such a large wall, and to keep constant track of all of the proportions. It is wonderful to work on such a large scale. My strength lies therein.

A mural is not just an image, but also interacts with the space around it. For me it is a challenge to visualize what colours, forms and symbols have to be used to take full advantage of a location and its relationship with the surroundings and its community. Reactions to my art works over the last years have made me ever more aware of the importance and the effect of the use of light, colour and form in the urban environment. The occupants of the flats opposite 'The rainbow snake' told me enthusiastically of how their own flats have become lighter because of the reflection of the colours used.

At the crèche 'The Cricket' it was as if people suddenly were able to see the crèche that had previously been swallowed up by the enormous parking space next to it. And the children have gained a space of their own protected by the work of art all around it. As time has gone on, my murals have undergone a change in form. 'The Rainbow snake' covers the whole house; only the tail stubbornly sticks out into the space beyond as if it points at something new. This something is to be seen at 'The Cricket'. The painting is put onto the building as an independent form and moves outside of the buildings lines at various places. In my view cities are living bodies, with squares, roundabouts, towers and churches as acupuncture 'points'. Waterways form its arteries. Paths and roads bring connection and movement. As with a body it is important to care for a city's health and quality of life. My murals are 'injections of colour'.